Graphic print or painting, painting or graphic print? Painting and graphic print each have their characteristics and are, for the most part, hard to confuse. For many artists who use both mediums, the all-important ability- choosing- becomes apparent when they print. The ability to choose a composition, how a picture showed be cropped and lie on the surface – Marianne has this talent and it shows in her graphic work. Marianne has a sure hand and a well trained eye for choosing subjects and compositions that give a striking effect.

As with the work of many Funen artists, Marianne’s pictures are inspired by the natural world. This inspiration differs, however, from traditional funen art with its motives of landscapes and cows. There is a new “Funen art”, one that is shared with many Funen artists and which maintains the Funen tradition and its fondness of nature and life. Early in her life Marianne showed an interest in art, being particularly inspired by the universe of Salvador Dali’s paintings. After gymnasium Marianne was an apprentice illustrator. Besides her own artistic production, she is a keen teacher, and frequently takes part in workshops in ENDEGRA, a European cooperation on teaching graphic printing.

Marianne is dedicated to working with pictures that have the will to grasp the moment. Marianne’s works have vitality to them and express a joy at life, in a way that affects the viewer. The themes of her work are nature and life. Marianne’s pictures are like a symbol of existence and life. They are very calm and warm, with a fine sense of colour.

Marianne’s graphic work is inspired by close at hand things such as animals, dogs, birds and trees. Especially crows and owls, which symbolize the finding of balance and knowledge, have their place. Other works are inspired by dreams and imagination. They express happiness, a love of colour and movement, but also so strong an urge to give a naturalistic representation of reality that I would call it magical realism. These pictures have an objective, but also optimistic outlook on life. There is an appealing clarity and a universe touched by the mystical and by the beauty of detail, right where the devil is. Marianne’s work is similar to the surrealist’s form of expression, which is why they grasp their viewer.

By Lene Leveau, the manager of The Funen Printmaking Workshop, 2016 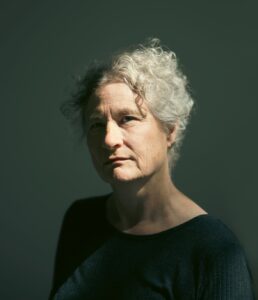